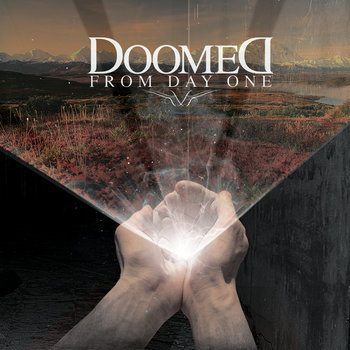 I’ve never made a big secret of the fact that I love Guildford’s music scene. The sheer amount of musical talent hidden below the level of fashion-clone high street shops and uppity snobs with Come Dine With Me dreams is mind-boggling. Scratch away the net-worth-obsessed surface and you’ll find pop singers, gypsy jazz quintets, folk dreamers, alt-rock groups and, in Doomed From Day One, prog-metal titans in waiting. When they get big, many will assume DFDO’s success to have been some overnight phenomenon – but that’s simply not true. Doomed From Day One have already spent countless nights slogging around the local gig circuit, and their hard work is finally paying off. Nine Fingers is evidence of this. Full track-by-track analysis below:

Nine Fingers: Deep atmospherics give way to djent grooves and Animals As Leaders-style lead lines. This track could easily have been stretched further than its allocated minute-and-a-half. No matter, though, because it quickly segues into…

Cut And Hunt: Between-The-Buried-And-Me-level progressive hardcore and tight shredding / double-kick patterns. Jealousy-prone instrumentalists would do well to avoid the scarily agile instrumental break at 3:10, as well as 4:09’s flamboyant sweep-picking display. As for the rest of you: Yeah, I rewound those bits a couple of times, too.

At Grave’s End: Shades of modern-day Dream Theater topped with hardcore vocals, and riffage that proves more epic than Homer’s Odyssey. Then a truly sexual BTBAM chilled section and, at 5:13, an incredible polyrhythmic breakdown. This track is my personal favourite; check out the official video for this track at the end of this review.

The Promise: Falling-down-the-stairs-in-fast-forward groove riffs and distinctly BTBAM-flavoured chords during the unexpectedly funky low-intensity section. Some very cool bass behind a sexy and tasty jazz-metal solo that leads us back into one hell of a beatdown. So brutal that just listening to it might land you in A&E.

Dread: It’s really heartwarming to hear an emerging local band who’ve clearly spent countless hours marinating in BTBAM’s soundwaves. Not that this track is some kind of sycophantic, imaginationless pastiche – there’s plenty of distinctly DFDO stuff in there too. DFDO have developed an important skill: the ability to absorb influences and then mutate them into something they can call their own. Sick guitar harmonies and triplet unison riffs in there as well.

This Life Not The Next: The longest track on Nine Fingers opens with some very intriguing leads dissolving into pure metal that’s about as brutal as any WWE Hell-In-A-Cell match involving Mick Foley. Although by this point the compositional elements are inevitably predictable (insane odd-meter riffs, hardcore vocals, chilled section, etc.), it’s simply not possible to know exactly what’s coming next – and so the listener is unlikely to really care about the most common criticism directed at bands like DFDO. With more twists and turns than The Smiler at Alton Towers, there’s more than enough unpredictability here to reward repeated listens. Plus there’s a brilliant Stu Hamm-style bass solo, with plenty of tapping. What more could you ask for?

Overall, Nine Fingers contains more than enough heaviness to keep metal obsessives happy, and enough variety to keep prog-heads engaged. Doomed From Day One are in possession of a seemingly bottomless bag of groove-metal riffs and well-timed technical tricks, all set within a precisely nuanced production job. It would be very interesting to hear DFDO take on a full 25-min epic and extend their instrumental sections – they’re guaranteed to pull something new and unique out of their collective brainpans. A little more djenty spice would also be welcome, regardless of whether or not it’s still considered fashionable.

In music, as with any art, you get out what you put in – and to get this mini-album out, Doomed From Day One have obviously put in far more than the standard blood, sweat, and tears. This is a six-track set that could only have been made possible through sheer bloody-minded and obsessive focus and dedication – and both DFDO and their fans have benefitted immeasurably as a result.

Like Loading...
Tags: Between The Buried And Me, BTBAM, DFDO, Doomed From Day One, Guildford, Hardcore, Metal, Prog, Tech-Metal