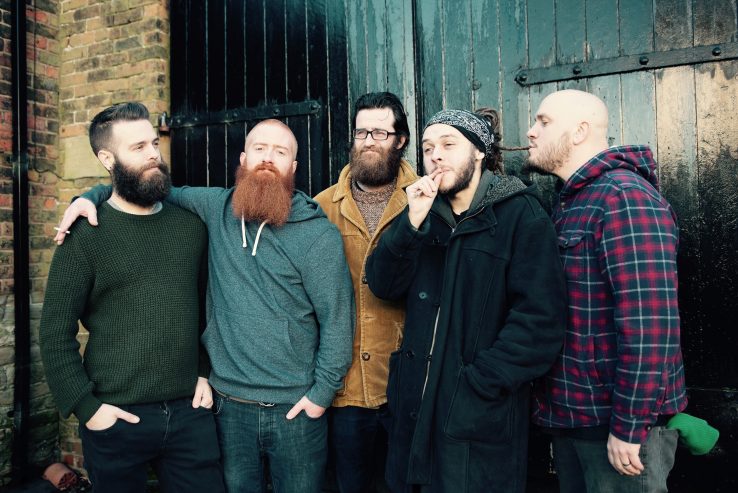 This interview contains one of my favourite answers of all time. Boss Keloid open the Yohkai Stage at ArcTanGent in about a week’s time – so check out the video below to see why they should not be missed, and read on to see if you can guess which response was the clear winner…

You’re set to beat ArcTanGent 2018 into a bloody pulp. How are the preparations going?

Preparations are going good. All is sounding great and ready to be projected out of our bodies [and] into the ears of the audience.

When you were growing up, which gigs had a major impact on you?

I’ve been to so many gigs since the age of 13. Seeing Pantera do their thing at the Royal Court in Liverpool when I was 14 was pretty special, and in my early twenties I really started to become obsessed with attending gigs. I was at two or three a week if I could get to them.

Seeing a band called Amplifier years ago at a tiny venue called the Witchwood is a gig that sticks in my mind. There weren’t many people there, but they played as if it was Wembley Stadium. Blew me away.

What happened at the first show you ever played?

I seriously can’t remember the first gig I ever played, but I know it would have been a sexual experience as usual, ha ha!

The first Boss Keloid gig was complete chaos and played ten times faster than it should’ve been, because we were all buzzing to show off this crazy shit we had come up with, and adrenaline took over.

What’s the most random thing that’s ever happened during a Boss Keloid set?

One thing that springs to mind is a gig we played in our home town of Wigan a while back, and just as we were ready to go on stage, this strange-looking older chap wanders on stage and asks our bass player Liam, “Who’s in charge of you?”.

He then proceeded to ask me the same question, and kept repeating it over and over and over until I sort of slightly lost my temper, and told him to do one. The owner of the venue then asked him to leave, to which his reply was – yes, you’ve guessed it – “Who’s in charge of you?”.

I hope he had a good evening walking around Wigan asking the same question to everyone. Shame he missed the gig.

If a stoned stranger were to ask what you sound like, what would be your response?

Like the passionate screams of your mother as your father made love to her when you were conceived.

Do you ever get stage fright or nerves before going onstage? If so, what helps you deal with it?

Yes, of course. It’s more of a nervous excitement for myself. A few beers and a pipe of the good lord’s herb helps, but you have to be carefully to get the balance right or you could end up stepping over the line, and then all could go completely wrong.

I’ve had plenty of practice though, to make sure that NEVER happens.

What’s the toughest thing about being in a band?

Not being able to put our whole time into it. If being in Boss Keloid was our full-time job, I know we would be creating non-stop and releasing albums every month.

Traveling about can be hard work too, but that’s all part and parcel of it.

If money, space, and good taste weren’t issues, what would your ideal festival stage show look like?

Well, just like the great Funkadelic I would definitely have a UFO dropping us off onstage. Other than that, I’d keep it very minimal and just make sure that most of the space and money was put into having the largest and most excellent PA used to project our lovely sounds out there to the lovely attendees.

I have one and one only, and it’s…

Get a pen and paper, because you don’t want to forget this…

No matter what predicament you get yourself into, wet wipes can sort it.

Beyond ArcTanGent, what are you up to for the remainder of 2018?

Lots of tasty things are happening. We’re playing Into The Void Festival in the Netherlands in October, that also coincides with a UK tour with Ohhms. Mini tour with Korokuma, mini tour with Desert Storm, and lots of other little bits and bobs.

Working hard on the next album too; that’s sounding great so far.

All the info for up and coming gigs / tours will be posted up on all the social media sites, so just keep an eye on there.

Need more to read? Click below to start reading Why Do Good Bands Break Up? for free!