The Fierce And The Dead – ‘Spooky Action’ [Review] 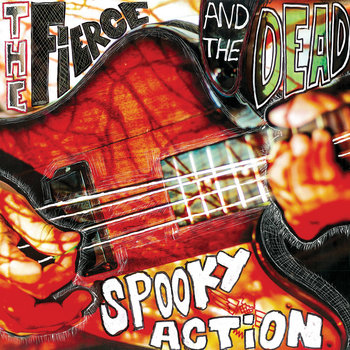 This has to be the dirtiest album I’ve heard in a long time. The most recent instrumental offerings collected in TMMP’s archives have been markedly slicker than Spooky Action (Alon Tamir’s Terraforming and The Best Pessimist’s Love Is…) and/or Belgian (Celestial Wolves’ Wood For Wood; Marteleur’s My Anvil Is My Tuning Fork; Industroika’s North) – but thanks to The Fierce & The Dead, we now get to check out an album that not only promotes the joys of filthy instrumental noise, but was also created less than an hour away from TMMP HQ. Finally, London gets a well-deserved spot among its overseas art-rock contemporaries, represented in fine form by TFATD.

Listening to this album alongside the several others being reviewed at the time of writing, the most obvious thing to say is that Spooky Action really stands out, not just in terms of its unabashedly passionate delivery but also in the intense sense of cathartic release spilling from its surface, like boiling bubbles frothing over the rim of a neglected pan of water sitting on a stovetop. It’s certainly raw too – no doubt about that – but there is a consistent indication of something more, something tantalisingly intangible, going on in there.

Perhaps the best way to describe the tracks on Spooky Action would be “dynamically fascinating”; on second track Ark, for example, slick cleans get chucked unceremoniously into neck-deep mud, pulled out again, tossed back head-first, dragged out by their ankles, and repeat to close. Pyramid Hat sticks funk-fusion fingerwork in front of classic Crimson-esque prog rock; Intermission 3 seethes into the stoner-rock groove of title track Spooky Action; and Entropy builds and dissolves in an appropriate manner given its title. There’s nothing here to bore the listener, no interminable repetition and no lack of imagination whatsoever. Spooky Action gives back far more than any listener can put in, concentration-wise; a rare offering of musical generosity.

A common accusation levelled at bands like TFATD goes along the lines of “Yeah, people seem to like it…but can they really play?” Spooky Action takes the only course possible in addressing that criticism: Simply not giving a fuck, and focussing on the music. The result may be an acquired taste – but as usual, open ears bring more pleasure than sitting in your comfort zone and trying to bat weird new music away with sticks made of words. Get below the scabbed surface of Spooky Action, and have fun in there.

One response to “The Fierce And The Dead – ‘Spooky Action’ [Review]”